At Holy Trinity Primary School, for History, we want children to be interested and excited to learn about the past. We do this by encouraging children to ask and answer their own questions linked to their history topic and by using a range of resources that will bring history to life, for example photographs, workshops, diaries, newspaper articles, music and handling real objects from the past.

As Dartford is such an historical town we would want the children to be aware of the rich and wide history that can be found. The town has history dating back to the stone age. There are so many local history stories that these should be developed in the classroom and interlinked with topics where possible.

Many schools in London joined in the celebrations of the Cato Street conspiracy. This Year marks 200 Years . Schools were asked to produce art work about the conspiracy and the lucky winner would have their art work hung in Marylebone's Cube art gallery. Out of all the children who entered our school had the winner. Lotte, in Year 6, has her art work now in the gallery!

The Cato Street Conspiracy was an attempt to murder all the British cabinet ministers and the Prime Minister Lord Liverpool in 1820. The name comes from the meeting place near Edgeware Road in London. The police had an informer and the plotters fell into a police trap and 13 were arrested, while one policeman was killed. Five conspirators were executed, and five others were transported to Australia.

Dartford is such an historic town and this term Year 5 have been learning all about local history. Mr. Daniel is very knowledgeable about Dartford and volunteered to take the children on a local history walk. They had a great time and some children made cards to say thank you. Here are just a few. It made Mr. Daniel's day to receive these so thank you all that made them. 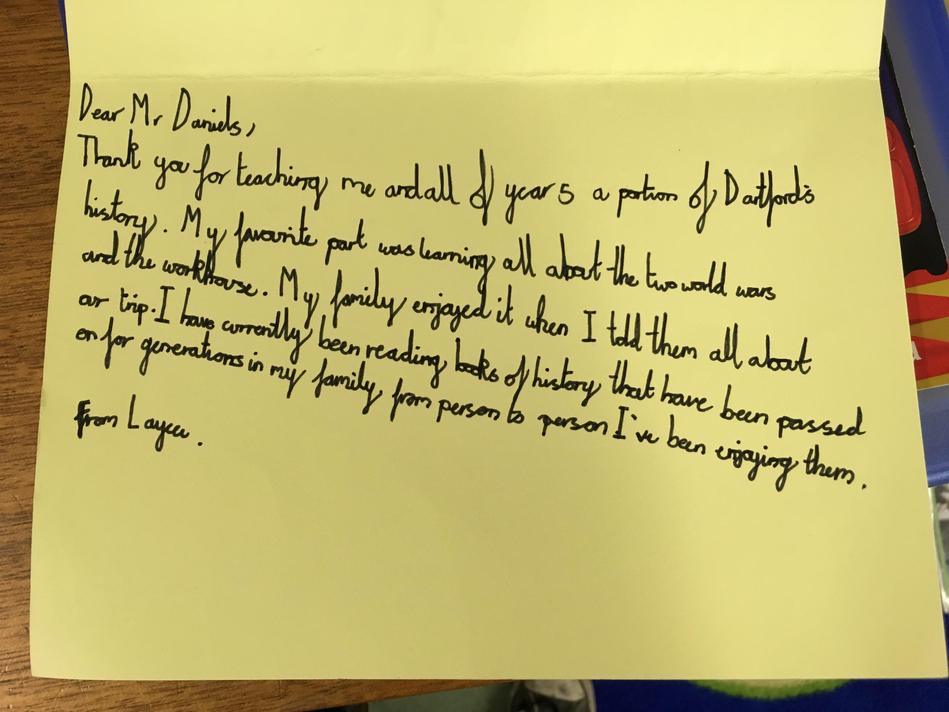 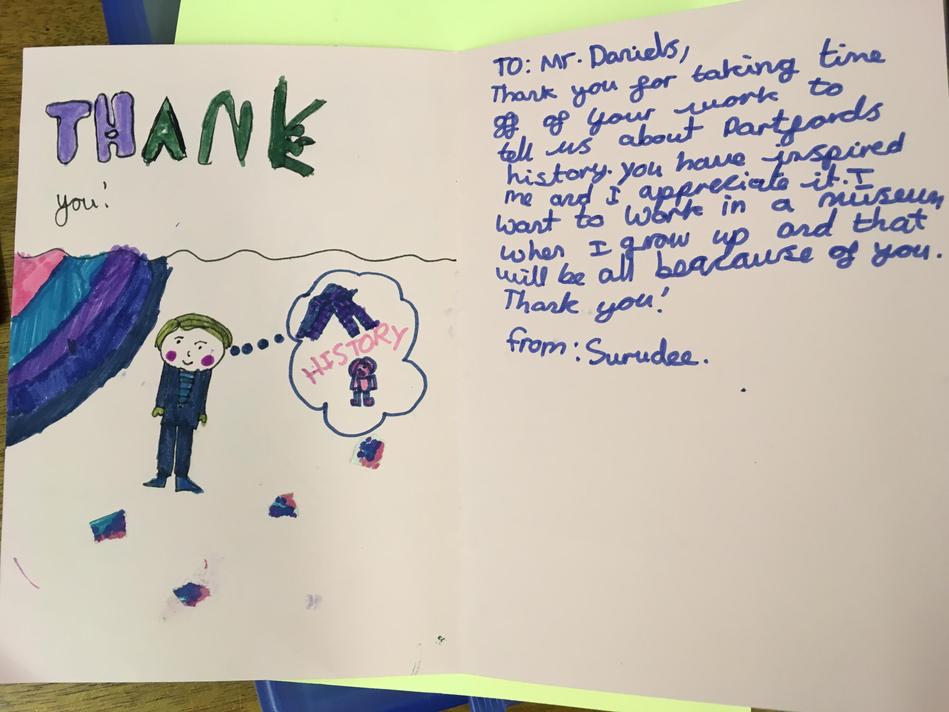 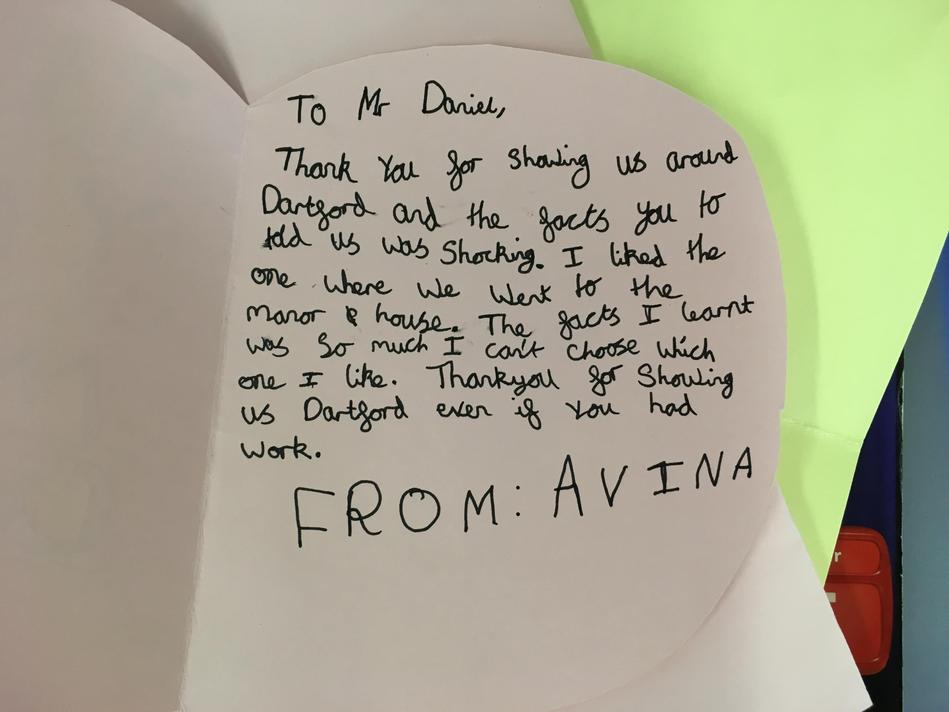 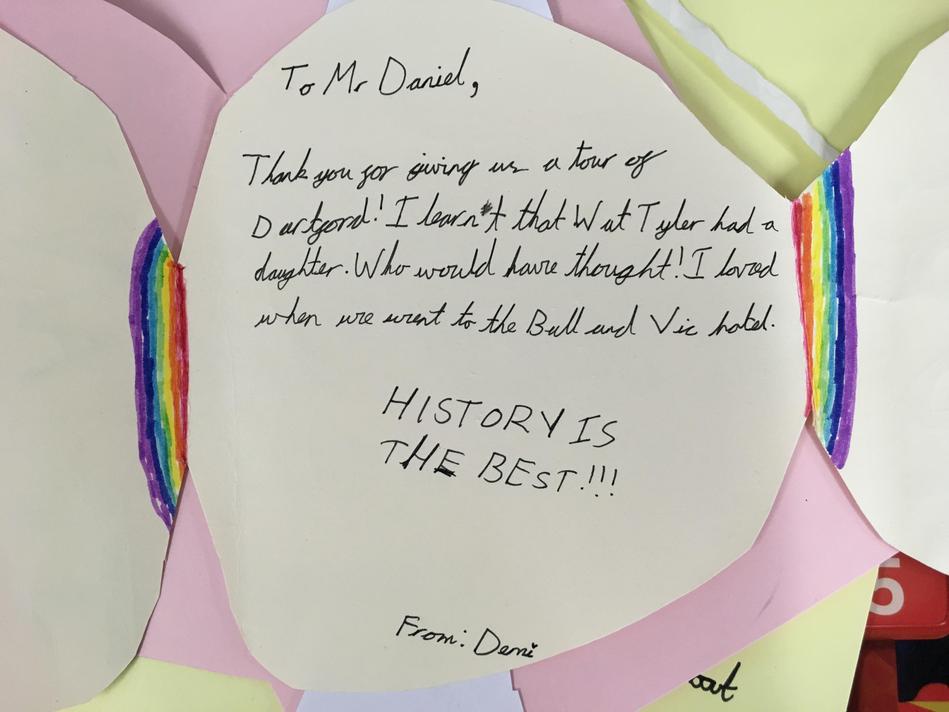 History club meets on a Tuesday after school and is for Year 1 and 2 children.

Each week the children learn about an important event or person on history. I also wanted to make the children think about how these events are recorded and whether or not the recording is biased.

We always like to know what the children think of things in the school. We call this pupils voice. The children were asked to write about what they thought of History Club. Here's what they had to say:

I love about History Club is Henry VIII because I want to know how many wives he had. Cindy

I love about the History Club is that we learned so much stories. This is the best club in the world. I like Henry VIII. I love listening to stories.

I want to learn more about the Greek Myths.

I love History Club because I like history and Mrs Daniel for telling history stories. Sophia

This is the best club ever! You should join this club. The thing I like is the Pandora story. It was so fun. Sarah        I like History. Jedaiah       I loved all of the stories. Jason    I liked learning about Henry VIII. Oscar

History Club is the best. Thank you for telling us fantastic stories. Lora

I like history club because I get to bring teddies and read stories. Aleha

I like the story of Pandora opening the box. Chiamaka

It was amazing. Can I have some more History Club? Kamil

It would be nice to get teddies for the children who didn't have them. Lumi

This was the final week of History club and I hope that the children have really enjoyed themselves and learned a few things on the way!

Teni from Puffins won the prize for the Bayeux Tapestry colouring competition and was given a story book all about 1066 and the Norman Conquest.

This week I told the story of Queen Elizabeth I and Frobisher. Sir Martin Frobisher was an English seaman and privateer who made three voyages to the New World looking for the North-west Passage. On his second voyage, Frobisher found what he thought was gold ore and carried 200 tons of it home on three ships, where initial assaying determined it to be worth a profit of £5.20 per ton. Encouraged, Frobisher returned to Canada with an even larger fleet and dug several mines around Frobisher Bay. He carried 1,350 tons of the ore back to England, where, after years of smelting, it was realised that the ore was comparatively worthless iron pyrite ('fool's gold').

This is where the local part of the story comes in.....

The Fools Gold was then dumped on the foreshore near to Dartford and this material was used by locals to repair the wall at the Manor House where Ann of Cleeves was resident at the time. This wall is the one by B and Q and if you look carefully you can still see the Fools Gold in the stone wall.

As an English privateer, he plundered riches from French ships. He was later knighted for his service in repelling the Spanish Armada in 1588.

This week we learned about Henry VIII and his six wives. I wanted to concentrate on Anne of Cleeves and her local connection. The story goes that she was wed to Henry ( his third wife ) but she was not very good looking do he wanted a divorce. He gave her the Manor House in Dartford, now the Manor Gate House near B and Q is all that is left of it.

Following the dissolution of Dartford Priory, Henry VIII chose the site to construct a Manor House between 1541 and 1544 for his personal use. In 1545, this venue became one of the most politically important in Tudor England, when the Privy Council met here.

Anne of Cleves was given the Manor House after Henry's death in exchange as part of her divorce settlement and she lived there from 1553 until shortly before her death in 1557.

Elizabeth I retained the use of the Manor house but only stayed there on two occasions. Today, it is just the Gatehouse that remains. This is an historic building and the exterior is definitely worth a look. The interior is now used for offices.

The Manor Gatehouse is located on Priory Road in Dartford.

This week we looked at the Bayeux Tapestry . This is a different way in which history is recorded.  The Bayeux Tapestry is an embroidered cloth nearly 70 metres long and 50 centimetres tall, which depicts the events leading up to the Norman conquest of England concerning William, Duke of Normandy, and Harold, Earl of Wessex, later King of England, and culminating in the Battle of Hastings.

This week we looked at Greek Myths and the story of Pandora's Box. The children got to make a person out of play- dough and beath it to life like Zeus!

Today Miss Gold led a beautiful Remembrance Worship for the children and staff. She explained to the children why we have poppies as a symbol of remembrance and who we remember on this special day. It was a wonderful assembly and the children were very respectful. 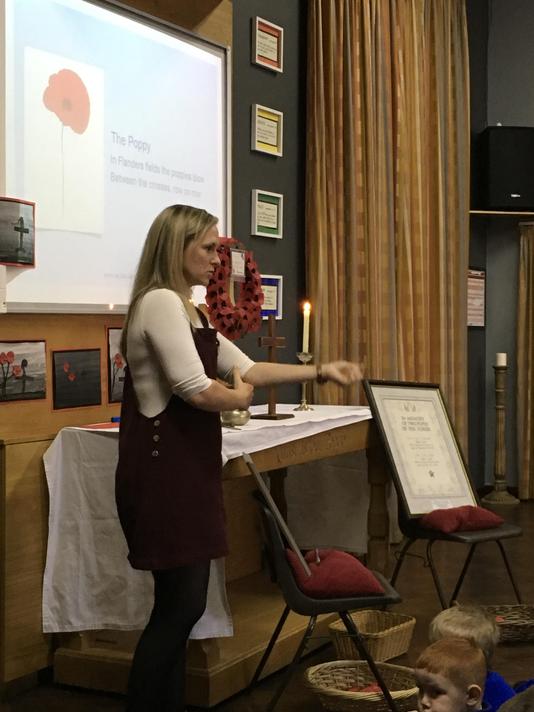 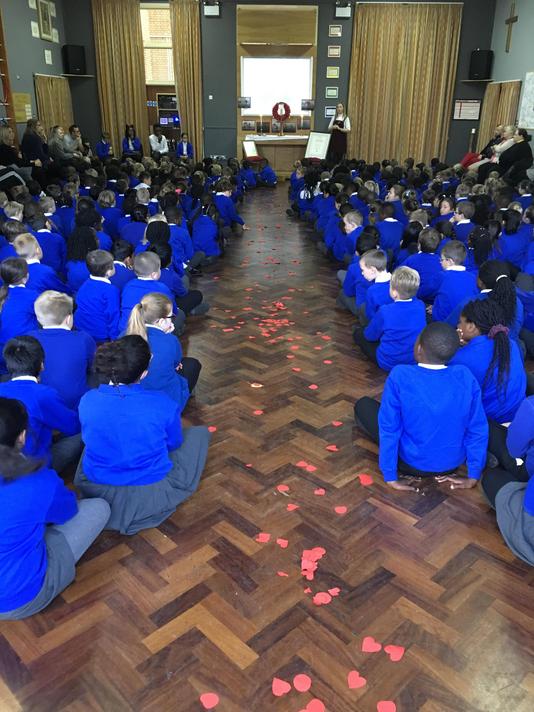 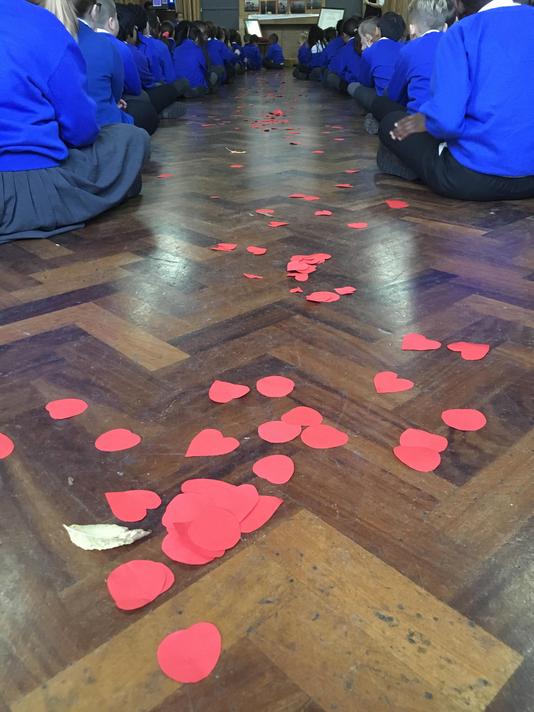 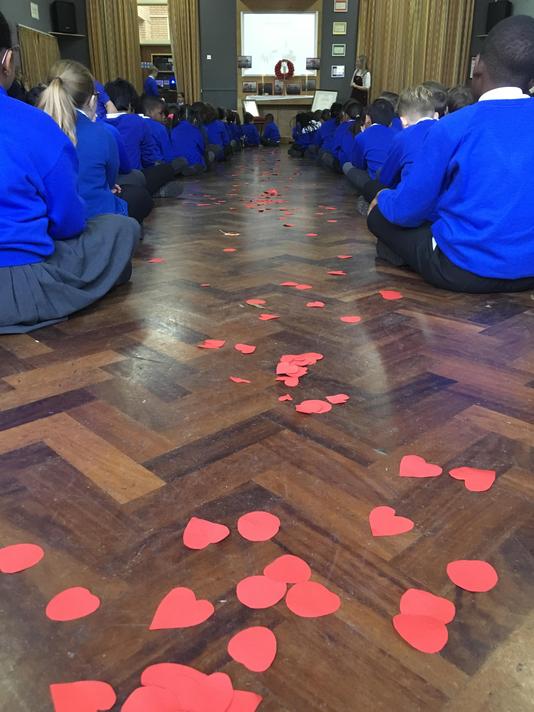 Since September, Y6 have been working on how WW1 shaped the lives they lead today in Dartford.  They have looked at the role of women in WW1 and the children have been taken to parliament to learn about the suffragettes and the election of Nancy Astor as the first sitting female MP after the are ended (100 years ago this year).  Children have undertaken a WW1 walk of Dartford and discovered about suffragette protests in their town and reflected on four ex pupils from their school on the Dartford War memorial.  On Remembrance Day they will be visiting Westminster Abbey's Tomb of the Unknown Warrior and will take part in a service around it for 2nd Lt Wilfred Salmon. As you may know, Salmon's story is one of the most significant stories from Dartford during WW1.

Children have used archive sources to piece together the story of Australian RFC pilot Wilfred Salmon, who was based at RFC Joyce Green and was killed trying to defend London from German Gotha bombers in July 1917.  Salmon's funeral service at Holy Trinity Church was followed by a procession to Watling Street Cemetery.  It was the biggest event to take place in Dartford during the Great War involving thousands of local men and women as well as many Australian servicemen .  The 1917 Gotha raids led to the creation of the RAF, the alteration of the Royal family's name from Sax Coburg-Gotha to Windsor (they didn't want to be named after a German bomber!!)  and the creation of the Vickers Vimy. The Vimy made its first flight at Joyce Green In November 1917 and this year sees the centenary of the first trans-Atlantic flight and first England to Australia flight in a plane celebrated on the One Bell Corner wall mural. To commemorate this and to raise awareness of the role women played in its construction locally, a hundred children will work with MOD Theatre Company to perform Ballarat Jackeroo in Dartford's parish church, Holy Trinity on Friday 8th November.

This is the way the children will pay respect to the people who lost their lives in war for us.

October is Black History Month. This national celebration aims to promote and celebrate Black contributions to British society, and to foster an understanding of Black history in general. At Holy Trinity we want to celebrate Black history in Britain. Black people came from all over Europe and Africa and settled in London where their presence is significant but little known. The presence of Africans in England dates back to at least Roman times when African soldiers, who served as part of the Roman Army, were based at Hadrian's Wall during 2nd century AD! At Holy Trinity this month every class will be learning about great British Black Pioneers and their impact on society and celebrating our multicultural school.

Went across the nation

Left their home and family,

To what England called fantasy.

They worked for money,

Even though it wasn't sunny,

They came for a better life.

Unfortunately not the ones with chocolate chips.

Some cookies are necessary in order to make this website function correctly. These are set by default and whilst you can block or delete them by changing your browser settings, some functionality such as being able to log in to the website will not work if you do this. The necessary cookies set on this website are as follows:

Cookies that are not necessary to make the website work, but which enable additional functionality, can also be set. By default these cookies are disabled, but you can choose to enable them below: